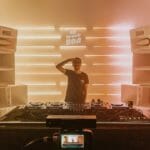 Bruno Furlan furnishes something sure to get house heads hot under the collar. Pushed forth via HUGS, an electronic platform with roots in Sydney, Australia and Bay of Plenty, New Zealand, the simmering submission from the Brazilian tastemaker takes aim at the dance floors now re-admitting attendees around the nation. Toggling between a John Summit meets DIRTYBIRD brand of sound and Furlan’s own house-informed idiosyncrasies, the stomper seeks hip shaking and hands in the air participation, and when deployed in a live setting, its red-hot underground appeal will infallibly elicit just that.

Furlan attributed the inspiration behind “You Make Me Feel Hot” to a specific feeling experienced within the club, a venue, or really, wherever live music is playing. The São Paulo native said,

“[You Make Me Feel Hot] is part of the new Bruno Furlan, it’s easy to see a heavy evolution without losing the real BF ID! I did this track with my girlfriend Sabrina thinking how we feel in the parties and how we will feel when we can feel the floors energies again! In your home, in the big speakers, in the car, isn’t important where…you will feel hot!”