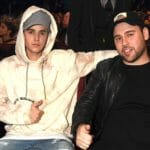 Braun said in a statement,

“This is an opportunity for us to make history and further innovate the music industry and revolutionise the game itself. Its implications for the business will be monumentous for a long time to come. I am incredibly grateful for Chairman Bang’s friendship and his willingness to support the creative journey of an artist.”

Braun will become a board member of HYBE following the acquisition, while Scott Borcehtta, who ran Big Machine Label Group, will remain chief executive of the group. CEO of HYBE, Bang Si-Hyuk, said in a statement,

“The inevitable joining of HYBE and Ithaca Holdings marks the start of a new adventure no one could have possibly imagined. The two companies will work closely together by leveraging our proven track records of success, know-how, and expertise to create synergy, transcend borders and break down cultural barriers.”

Big Machine made headlines with the purchase of Taylor Swift’s first six albums. The company then sold the rights to Swift’s catalog last year. Swift is currently re-recording her first several albums as a means of retaining ownership.