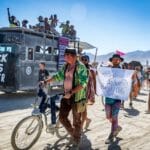 The always forward-thinking Burning Man has officially rescinded its 2021 theme, “Terra Incognita,” due to the theme’s insensitive connotations. The latin phrase, meaning “unknown land,” is traceable back to the Egyptian scholar Ptolemy. Concerns arose about its implicit biases regarding the country’s colonial history after Burning Man issued a statement announcing the theme and gently urging its attendees to begin planning for August. “Terra Incognita” reflects the exploration of undocumented regions; according to the Merriam-Webster Dictionary, the term may also apply to mental exploration. However, Burning Man chose to make a modification,

“When we learned the phrase [Terra Incognita] has a colonial history, and it reflected some of our implicit biases and default perspectives, we retitled it.”

The official revised Burning Man theme is now “The Great Unknown.” The festival board will make an official statement on whether or not the event is happening no later than the end of May, according to the Reno Gazette Journal. After a year of isolation and upended human connection, the two themes are to reflect the exploration of a newfangled social landscape. Stuart Mangrum, director of the Philosophical Center of Burning Man Project, wrote,

“This is an invitation to emerge from our collective isolation, to explore the unfamiliar contours of a changed world, and to reimagine ourselves, our community, and our culture in ways that might not have been possible before this period of plague and pause.”

Keep up to date regarding the return to Black Rock City throughout the spring and into the summer here.