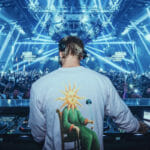 Calvin Harris has kept himself busy throughout the past couple of months. Following his first in-person performance in nearly two years as well as a production credit on The Weeknd‘s Dawn FM, the 18 Months mastermind is celebrating the two-year anniversary of the unexpected introduction of his Love Regenerator alter-ego, pairing up with both Riva Starr and Sananda Maitreya for the project’s step into the new year, “Lonely.”

“Lonely”—Love Regenerator’s first outing since the two-for-one EP alongside Solardo—pivots the alias into a slightly different form than what we’ve seen comparative to the ’90s rave-inspired sound going back to its January 2020 grand entrance. Intertwining warm elements of piano and melodic house, Harris adds to Love Regenerator’s collaborative record, setting up for the impending Ibiza season alongside Riva Starr as they sample Maitreya’s 1989 release under the name Terence Trent D’Arby, “…And I Need To Be With Someone Tonight.”