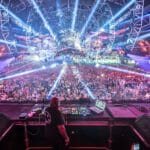 Carl Cox gets the wheels turning with his new remix of Deborah de Luca‘s “Fuori.” The King of Techno applies his Midas touch to the Italian producer’s acid techno original by advancing the tune’s tempo, and warping the track into an inferno of underground warehouse grooves and dissonant melodies.

Cox’s latest reimagination follows his recent single “Sand, Moon & Stars,” as well as his staggering remix of Jon Rundell and BreakCode‘s track, “What Lies Beneath, Pt. 2,” both in which released in March. Cox adds seductive flavor to “Fuori” while effortlessly overwhelming listeners with acidic 303 basslines and electrifying drums. In signature fashion, the veteran British DJ provides a dramatic twist to “Fuori,” while still keeping the ambience firmly primed for the underground.