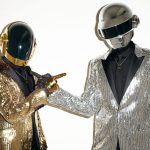 It has been 20 years since Daft Punk‘s landmark Discovery LP arrived and unequivocally changed the course of dance music. With the world still largely feeling the void left in the wake of the duo’s recent disbandment, a spirited celebration of the Androids’ beloved sophomore studio album is in order. Luckily, Spotify has it covered with the launch of a new “Enhanced Playlist” that features a wealth of newly unearthed Daft Punk iconography.

With the use of Spotify’s Canvas and Storylines functions, fans can surf through previously unseen concept art and storyboards from Discovery’s companion film, Interstella 5555, short clips from the film, and more all packed into the Discovery – Enhanced Playlist.

Widely lauded as one of the greatest dance records of all time, the Discovery phase marks the beginning of Thomas Bangalter and Guy-Manuel de Homem-Christo’s robotic alter-egos, and thus, the emergence of the most ubiquitously recognizable, iconic figureheads in all of electronic music. The album was a critical and commercial success and still stands as a paragon of perfection to an entire generation two decades later. Celebrate Daft Punk’s legacy, and throw it back to 2001, with Spotify’s new “Enhanced Playlist” below.