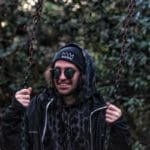 On Friday, December 10, reports surfaced that CharlestheFirst, born Charles Ingalls, had died. He was 25. Ingalls’ official cause of death has not been announced. According to a report from WZTV Nashville, Ingalls was found dead by a friend in his hotel room Friday morning.

Artists across electronic music have taken to social media to express their condolences and remember the budding producer’s promising impact within the industry. From artists who befriended CharlestheFirst, to those inspired by him, electronic music tributes have come out in droves.