Chicago is the birthplace of house music, and one alderman wants to make sure that’s celebrated.

Carlos Ramirez-Rosa tweeted on Monday that many tourists are “shocked” to learn no late night clubs exist that promote the sound born in the Windy City.

Most clubs close at 2AM in Chicago. Some, like Smart Bar in Wrigleyville, stay open until 4AM. 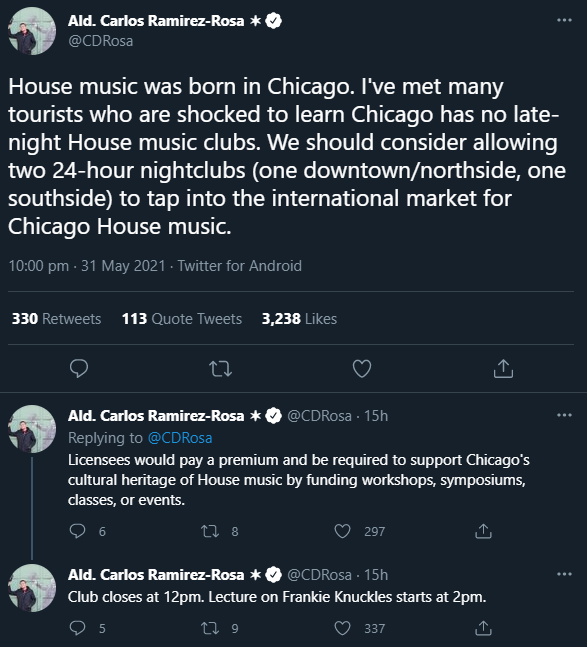 “We should consider allowing two 24-hour nightclubs to tap into the international market for Chicago House music,” Ramirez-Rosa tweeted.

The alderman’s proposal would charge an additional fee to club operators. The clubs would also be required to support the genre’s heritage by funding workshops, symposiums, classes, or events. Reaction to Ramirez-Rosa’s ideas was mixed.

Some welcomed the idea, but asked why stop at only two 24-hour clubs. Still, others called the idea dumb. They say Chicago has more pressing concerns on its plate.

According to MusicOrigins.org, house music got its name from the former Warehouse club. The Warehouse opened in 1977 on Chicago’s southside. Locals called it “The House,” and music played there became known as “House Music.”

DJs Frankie Knuckles and Ron Hardy both played at the Warehouse. They are considered early pioneers of the sound that’s now heard at clubs and festivals across the world.

Swedish House Mafia Cancels Their First Show Back As Two Members Get ...

Berlin To Ban Dancing In Nightclubs Due To New Regulations