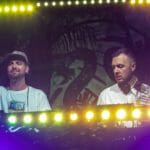 It all began in the midst of Chris Lorenzo‘s set during EDC’s Virtual Rave-A-Thon this past May, during which Lorenzo revealed that he and his Anti Up counterpart, Chris Lake, were confidentially mapping out a full-length debut for their byname; but 2021 would come before any further details would be aired. Fast forward almost 10 months into the future, and Anti Up are now seasoned to drive the currently unnamed LP in motion with “Sensational,” the duo’s first shared appearance in more than a year’s time.

Reflecting back to a time when festivals were actually a part of everyone’s day-to-day in 2019, “Sensational” initially made the rounds in a pile of Anti Up back-to-backs, with house enthusiasts flooding the comments of every fan-recorded YouTube video to ask “what is this ID?” It wasn’t difficult for its eventual title to be deciphered, thanks to an updated “Sensational” version directed by a synthesized vocal that spells out its name accordingly. It doesn’t serve the typical four-on-the-floor house foundation relative to past Anti Up outings, but Chris Lake and Chris Lorenzo still work their respectively unequaled magic, providing a favorable introduction to what may very well end up on Dancing Astronaut‘s albums of the year list when all is said and done.