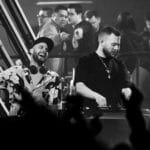 FISHER and Chris Lake are bringing their “Under Construction” show to Chandler, Arizona, giving house music lovers a Memorial Day Weekend event to look forward to. “Relentless Beats Presents Under Construction” will take place outside of Phoenix on Sunday, May 30, at Rawhide Event Center. The show is poised to be a return to normalcy for many music fans with a special production planned for the evening performance.

Tickets go on sale here on Thursday, April 29 at 1:00 p.m. EDT (10:00 a.m. PT). Previous “Under Construction” shows in Los Angeles and New York City sold out within an hour, and a huge supporting lineup is promised to be announced. Fans looking to attend the Lake and FISHER’s curated event show will need to act fast, as this is the only time the duo is confirmed to play together in Arizona in 2021.

Ahead of general admission sales, Dancing Astronaut has teamed up with Relentless Beats to giveaway four tickets to the upcoming event. Enter below for a chance to win.