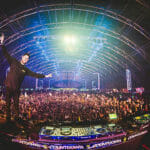 CID‘s initial outing on Sonny Fodera’s Solotoko label is a statement, to say the least. Featuring Lizzy Land on vocals, the Night Service Only label head’s “Can’t Stop Missing You” is a certified club-ready jam that, in characteristic CID fashion, will have listeners yearning for late nights.

Pairing an uplifting bassline with Land’s serene vocals, “Can’t Stop Missing You” exemplifies the enthralling brand of house music that streamers have come to expect not only from Solotoko but also from CID in recent years. Arriving hot on the heels of his two 2021 releases, “Bruises” and “Jumpin,’” 2013 Grammy Award winner CID continues his stellar release run. Stream “Can’t Stop Missing You” below.