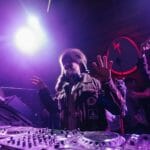 The EP, as many great ones do, came to fruition during a late-night conversation between the two electronic purveyors. Relishing in the limitlessness that they could explore in a joint pursuit, VonStroke and Jay found themselves in the studio together in the ensuing months, allowing their imaginations to take charge. Marking the migration back onto the dance floor, Oh latches on to non-traditional club tropes, including everything from quirky, buoyant techno, to reverberating bass excursions, to airy synth work. The two Dirtybirds have never been ones to shy away from a challenge, consistently keeping fans on their toes with each new sonic oeuvre, and their latest EP is a testament to their perfectly harnessed innovation.

With Dirtybird Campout creeping closer to its October 15 – 17 run, there is much to get excited for from the unconventional house and techno connoisseurs. Grab your tickets here and stream Oh below.