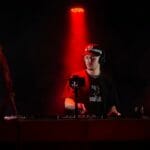 In an exclusive interview with Dancing Astronaut at DAY.MVS in August, Cloonee said the successor to July’s “Holla,” then still to come, was “one that people have been asking for for like three years.”

Noting that the single would arrive on September 17, Cloonee contextualized why there was such a stretch between the ask and the delivery, explaining “It’s taken us this long to get permission to use the vocal and it was for a track called ‘Hot [Steppa],’ but we have to change the name of it to ‘Love You Like That.’”

Cloonee concert attendees have been dancing along to “here comes the hot steppa” for quite some time. Well, the hot steppa has finally arrived, although the track’s official title has indeed been changed to “Love You Like That.” Currently mid-tour, Chris Lake‘s tech-house protégé is growing an immense fan base in the United States. Browse Cloonee’s forthcoming tour dates here and stream “Love You Like That” below.