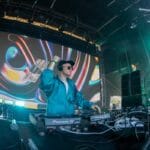 “BOOM! Top 10 gang…[‘TALKIN’] is the biggest release to date. So much love; thank you guys for supporting [the song]. Let’s run it [to] number one!,” Cloverdale stated on an Instagram story.

Tech-house fans will undoubtedly be “TALKIN” about the new release for many months to come, and it’s not too late to join the hype. Stream Cloverdale and DJ Susan’s first work of 2022 below.