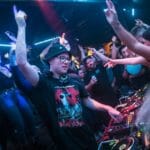 That said, Cloverdale is a self-proclaimed “high-octane tech-house” DJ, but at this point in his career, that goes without saying. What’s more, the Nova Scotian woke up a few days ago to what he thought was some sort of prank. Not only did Spotify add “Watch That Tongue” to both their “Bangers” and “Dance Rising” playlists, but the leading DSP also made an image of Cloverdale the new official cover of “Bangers.” See Cloverdale’s reaction to becoming the new playlist cover and stream “Watch That Tongue” below.

Tagged as cloverdale, insomniac, music, The Energy, Watch That Tongue.