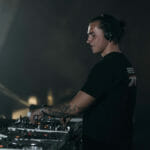 Even with Steve Angello’s concentration directed towards Paradise Again and Swedish House Mafia’s larger reunion crusade, he’s ensuring that Size Records holds its ground on being one of dance music’s finest homes for house music. The Swedish imprint had put an abbreviated pause on its release schedule in the wake of Highly Sedated’s “Winter Tires” back in July, but Size Records is now fully equipped to move full steam ahead into the new year with a fresh slate. But before it does, its recalling a familiar face in Corey James for one more track in 2021.

“Back For Nothing” tickets the English producer’s eleventh trip through Size Records over the past half-decade, with James supplying the historic imprint with a different side of house this time around. As its title suggests, Corey James is not “Back For Nothing” on his fourth and final original of 2021, stepping in to lay Size’s year to rest with a dose of grooving, striking acid-house—with some techno hues thrown in—and stretching his presence as a consistently clever mind whenever he touches the airwaves.

The post Corey James closes the door on Size Records’ 2021 with acid-house original, ‘Back For Nothing’ appeared first on Dancing Astronaut.