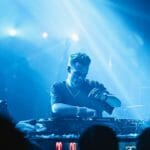 “Breathe,” which marks Curbi’s Monstercat debut, is his first solo single of the year and singularly showcases his high-energy prowess. The one-off trails his March 12 collaboration with Moksi, “Famous Last Words,” and “Make Amends” with Tchami and Kyan Palmer, released via Spinnin’ on February 12.

Monstercat Teams Up With Westwood Recordings for Celebratory 8-Track ...