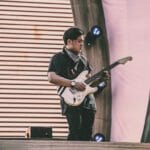 Isolation creativity set in pretty early for Dabin in April of 2020, who captioned a guitar riff snippet on Twitter with “what solitude sounds like.” Dabin later confirmed that he had an original in the release pipeline with Nurko, but it wasn’t until one of Dancing Astronaut‘s Artist to Watch in 2021’s Park ‘N Rave stream nearly a year later that “When This Is Over” actualized, leaving everyone to put two and two together that it was the byproduct of that teaser. Serving as the sophomore wing of Dabin’s presently unnamed junior LP, following “Drown” with Mokita, “When This Is Over” has now arrived in all its melodic grace, with both Nurko and Donovan Woods attached at the helm.

“When This Is Over” has all the makings of a pipe dream overlap between two of Dancing Astronaut‘s abiding favorites, forging forth into reality and writing off another bucket list assembly for Nurko exactly three weeks after he aligned himself with Illenium on “Sideways.” Putting your finger on who exactly contributed to which part of a collaboration is never black and white, yet Dabin and Nurko seamlessly furnish a tonic household of melodic bass that lives up to all of its prior forecasts, roping in Donovan Woods’ lulling vocals to square up with the duo’s idiomatic and inventive hallmarks.

The post Dabin and Nurko seamlessly cross melodic bass sides with Donovan Woods on ‘When This Is Over’ appeared first on Dancing Astronaut.