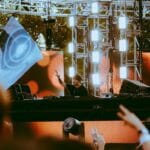 Dabin has fired on all cylinders following his compulsory pause of 2020’s Wild Youth tour, dispersing a series of melodic bass anthems spanning “Holding On,” “Hope It Hurts,” and his Illenium and Lights-assisted collaboration, “Hearts On Fire.” This trend continues with “Drown,” a Mokita team-up that doubles as the debut single from Dabin’s impending third LP.

Softly marrying acoustic guitar chords to Mokita’s vocals, Dabin engages elements of both pop and electronic, providing a persuasive introduction to the sound of his next long-form outing. With the rollout-inaugurating single now accessible via streaming platforms, formally kickstarting the LP unveil process, it now seems a matter of when—not if—Dabin will uncover “When This Is Over” with Nurko and Donovan Woods. It’s possible that the sought-after meeting of the musical minds could surface as an incoming album single or even appear later on the album’s tracklist at the time of its release. For now, though, Dabin enthusiasts can stream “Drown” below.