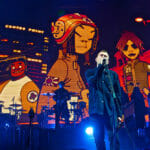 “We are supposed to be making a film while we’re doing season two (of Song Machine). We signed contracts, we’ve begun scripts and stuff…I see a lot of people doing animated videos these days but I don’t think they really touch the quality of ours. We’re more in the world of Studio Ghibli.”

Fast forward a year, and Albarn has confirmed that the highly anticipated Gorillaz film will arrive via Netflix. In a recent interview with Apple Music about his solo album, The Nearer The Fountain, More Pure The Stream Flows, Albarn shared, “I’m at Netflix because we’re making a full-length Gorillaz film at Netflix…we’re having a writing session in Malibu this afternoon.” Albarn went on to express how “extraordinary” it is “to see how ubiquitous [Netflix films] are now.”

2020 saw Gorillaz dispatch Song Machine: Season 1, Strange Timez. The 17-track, collaboration-heavy LP pairs with nine short-length video episodes. And in an age where both Universal Music Group and Timabaland are starting their own virtual bands led by digital apes, viewers can expect the pending Gorillaz film to only bring more attention to animated performing artists.