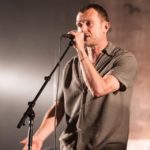 Damon Albarn isn’t one to stay still for long. Currently, the Blur frontman and Gorillaz mastermind is working on putting together his second solo album. The announcement came from Transgressive Records, who announced that Albarn had signed to the label for the release of his second album.

Albarn released his first solo endeavor, Everyday Robots, seven years ago, with another release from Blur and three Gorillaz albums in the time since. More details for his sophomore solo release, including an album title and release date, are expected to be revealed soon.

The post Damon Albarn is finishing up his second solo album appeared first on Dancing Astronaut.