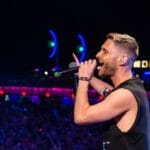 Supernovas is a recurring Dancing Astronaut feature dedicated to vocalists in the dance space who, with their own idiosyncratic vocal signatures and unique lyrical perspectives, have played pivotal roles in bringing electronic records to life. Each installment in the monthly series spotlights one vocalist. The serial continues with Supernovas 003: Jonathan Mendelsohn.

Where he stands today, Jonathan Mendelsohn is one of the singer-songwriters most synonymous with dance music, but his ascension to that eventual high-standing echelon didn’t come to fruition as quickly as he had initially hoped.

“It actually took me a really long time to break into the music industry,” Mendelsohn said of his origins. “I moved to NYC in 1999 to pursue my music, and it took a good 10 years to really get things going. I had some successes here and there and a lot of close calls. “

Fast forward to 2009, when his decade-long dedication would begin to gain some tangible traction after a hopeful MySpace message found its way to electronic titan Jody Wisternoff. Wisternoff would go on to facilitate a meeting between Mendelsohn and Nick Chagall of Cosmic Gate, and after “The Moment” caught the ears of Armin van Buuren and Dash Berlin, the rest, as they say, is history.

Jonathan Mendelsohn’s sonic glossary crosses over three distinctive decades, an anomaly in today’s dance music day and age, to say the least. To date, it spans collaborative appearances with a fathomless count of electronic heavyweights including Tritonal, Laidback Luke, Dash Berlin, Brennan Heart, Fedde Le Grand, Hardwell, Seven Lions, Blasterjaxx, Gareth Emery, SLANDER, and too many more to cite. While that list will only expand as the days, months, and years go by, he hopes to wet his feet more when it comes to standing on his own musically.

“I really struggle when it comes to releasing solo material actually. I’m such a perfectionist and am also pulled in many different musical directions artistically. I will say that there are a lot of great songs I am sitting on that need to be released and are almost done,” Mendelsohn said. He’s currently holding onto a brimming bank of self-made productions that are either 100% complete or close to it.

“I’m no Zedd, but my production skills are getting better so I keep working at it. I really love tech house and melodic progressive music so [my solo work] would most likely be something along those lines with some pop ballads sprinkled in. That may disappoint some fans but I can’t really worry about that,” Mendelsohn explained, adding that solitary releases have always remained on his to do-list, even as his collaboration-heavy career has unfailingly advanced.

Although he may still be fine-tuning his genius on the production end, Mendelsohn’s vocal knack, on the other hand, is certifiably unequaled and has come a long way since he initially put himself out there in the late 2000’s. And that progression, of course, isn’t something that has gone even the slightest bit unnoticed in his eyes.

“When I was younger, [songwriting] was a cathartic and very necessary form of self-expression that would administer a certain amount of healing to my soul. I find it completely fascinating that now I feel like I pushing the healing power of music into the world, something I never really considered when I was young.”

He says that turning songwriting into a full-time role has allowed him to be adaptable with his work, adding that he “used to get really married to an idea and get frustrated when [he] was asked to make changes.”

“But now I’ve learned how to scrap an idea and start again and not settle for good when it could be great,” he acknowledges. “I always want the songs I write to be the best they can possibly be and so I find myself going through a lot [more] revisions than I normally would. Sometimes it’s painstaking, but I think the end result benefits in the end.”

For those who have followed along with Jonathan Mendelsohn’s narrative from 2009 running right up until now, it’s no secret that he’s routinely trended towards both house and trance-leaning instrumentals, but he stepped back into the melodic dubstep light in 2020 for both a laudable “Ocean” successor with Seven Lions and Jason Ross, while adding in Crystal Skies on the Ophelia Records-hosted “Foolish Of Me” as well as “Hurts Sometimes” with SLANDER and Fairlane.

Though melodic dubstep serves as a slightly more unaccustomed route for him, he explained that he doesn’t necessarily pay attention to the specific genre that he’s working in. “Music is music no matter the genre,” he says. “I love when there is space for a vocal and a rich melodic structure to build on top of, but that really can happen with any genre of music.”

Like most artists, COVID-19 tossed a wrench into his creative proceedings throughout the past year. He’s faced his share of struggles with songwriting, with a recurring theme of “new starts and changes” constantly reappearing in his lyrics. “I don’t know if anyone can relate to that, but that’s just what’s happened to me. I’ve learned to ride the waves of creativity when they come and be gentle with myself when they’re absent, which happens quite a bit, more so as I get older and more at peace with myself,” Mendelsohn said.

However, his passion for dance music has never remotely subsided, even amid the challenges that the unrelenting pandemic has presented.

“Dance music has really been my favorite genre of music since I started going to raves in 1996. The energy of the music and the community surrounding it has always really appealed to me,” Mendelsohn said, clarifying that this isn’t to say he doesn’t share an affinity for more mainstream-leaning music, but rather that “the universe has [him] right where it wants [him]. “And I can’t really complain,” he concluded. “At the end of the day, it’s the music that takes me where it wants me to go and I just keep following that path no matter where it leads.”

The intention behind Dancing Astronaut‘s Supernovas series hits the nail on the head with what Mendelsohn emphatically wants readers to understand about working as a singer-songwriter in the dance music industry: the vocalist is equally as important as the producer. Those who have paid attention to the potentially paradigm-changing topics of discussion in the electronic space know that this is a topic that has only escalated in magnitude of late, with various other singer-songwriters not only sharing this sentiment, but also verbalizing it.

Mendelsohn openly expressed that he’s felt both “undervalued and underpaid” in proportion to what he’s done when bringing a project from the idea phase to the completion stage. “In EDM, the DJ/producer is king and there have been times where I had to fight for the recognition and terms I felt I deserved. I’m wise enough to not work with artists like that as a rule and instead gravitate towards the people I feel a sense of loyalty from and [who] make me feel like part of the team. That goes a long way with me,” he attested.

As a word of guidance to singer-songwriters in electronic music who are either searching for a simple point of entry or finding themselves gradually climbing the ranks, Mendelsohn advises any and all vocalists to not let up.

“There are a lot of opportunities to shine your light and touch people’s souls with music, so just keep doing what you love, whether it’s singing or writing songs or both. Learn how to record yourself; it will make your life easier in the long run. 98% of my releases were recorded by me, at home,” Mendelsohn said.

He also cautions those who are writing their own music to ensure they not only own the copyrights to their songs, but to also guarantee that their split of a publishing deal is both agreed upon and officially registered beforehand. Otherwise, they run the potential risk of not being properly compensated for their work. Further, “if you’re a singer on a track, don’t assume your name will be in the credits. Make sure it’s in the contract. It seems like a given, but you’d be surprised what you have to ask for when you’re the vocal artist in EDM,” he said.

As for what lies ahead as the outlook of the COVID-19 pandemic appears a touch more promising with each passing moment, Mendelsohn is straightforward in revealing that he currently doesn’t have any substantial sonic blueprints in the pipeline as of right now. But, he’s staying optimistic and knows that there’s a light at the end of the tunnel.

“I’m laying pretty low these days and I’m ok with that. I continue to write and make music and keep creativity flowing as much as possible. Of course, I really miss shows and traveling, as I’m sure everyone does as well. I’m really looking forward to this pandemic being over and life returning to normal but in the meantime, I’m just taking it as it comes. Good things are coming.”

Stream Jonathan Mendelsohn’s hand-curated Supernovas playlist featuring 14 of his favorite songs from his own catalog below.

Hardwell opens up about Avicii, returning on tour and more in latest ...

Your EDM Q&A: Does Canadian Techno Artist The GOAT Live Up to His ...

Explore Vintage Culture’s new single with Solardo, the evolution of ...