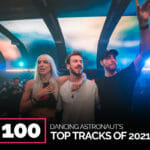 Plain and simple, 2021 was an anomaly not just for dance music, but also for music as a whole. A bulk of 2020 was spent imagining how releases would eventually translate to the in-person format again, and this contemplation carried over well into the new year, with no immediate end in sight. With the concert calendar in an interminable limbo all the way from January until the spring and summer months, artists continued to ride the unrestrained creative waves that they’d previously mounted—minus the time constraints of touring schedules. The music released throughout the course of the year consistently reflected the ingenuity that was the result of long and unimpeded periods in the studio. And even with concerts now (somewhat) back in full swing, it feels as if that mindset has yet to change.

Although in-person music programming was in stasis at the beginning of the year, original releases were anything but. 2021 was given a head start the very second that the New Year’s Eve ball dropped, when, in the early moments of January 1, Hardwell and Blasterjaxx decided to expeditiously secure a spot on our eventual reflection of the year’s most memorable tracks. Their long-awaited “Bootshaus ID” was a welcome starting point to a sweeping release record that we’d have to somehow narrow down to Dancing Astronaut‘s top 100 releases of 2021 when the time came. And if all went accordingly to plan this year, Dancing Astronaut‘s most-anticipated IDs of the year would hopefully provide 15 other releases that would join the Dutch duo’s bigroom collision, with 11 of those unreleased cuts clearing the release board when the year was all said and done. Gorgon City and DRAMA’s late-January delivery of “You’ve Done Enough” set the ID release train in motion. Later, Bleu Clair and OOTORO‘s “Beat Like This”—which STMPD RCRDS was kind enough to let us premiere— Porter Robinson‘s “Look at the Sky”; ILLENIUM, Nurko, and Valerie Broussard’s “Sideways”; Alesso’s “Somebody To Use”; Ophelia Records‘ “Pantheon”; RL Grime and ISOxo‘s “Stinger”; Dom Dolla‘s “Pump the Brakes”; and David Guetta, MORTEN, and John Martin‘s “Impossible” all received the green release light. But that was simply a trace amount of the 2021 productions that could be deemed Track-of-the-Year worthy, and while these 10 songs—and hundreds upon hundreds of others—were deserving of that sought-after title, only one now wears the crown as we reach 2021’s final hours.

“The track of the year conversation may be open and shut before its eventual winner even arrives.” This is how we prefaced “One More Day” on that forenamed list of our most-anticipated 2021 releases and the sentence now rings as true as ever. We knew it when Seven Lions introduced it at The Gorge Amphitheatre a year and a half ago, we knew it when it arrived in March, and we know it now that our Track of the Year couldn’t have been anything other than Jason Ross, Blanke, and Chandler Leighton‘s three-headed magnum opus of melodic-bass, “One More Day.”

“One More Day” shined brightly on the never-ending trail of Ophelia Records originals that amounted to its selection as Dancing Astronaut‘s 2021 Label of the Year, and considering the amount of times that we’ve tweeted about the track in 2021, “One More Day” vaulting from our favorite unreleased ID to our favorite release this year should come as anything but a surprise. While we stream “One More Day” for the 1,000,000th time, enjoy it—as well as 99 of our other top releases (in alphabetical order) of 2021—in our complete playlist below.

Tagged as 2021 tracks of the year, FEATURES, music.