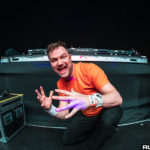 Dash Berlin has teamed up with ANG for a euphoric new single, “Firefly.” The one-off takes takes Berlin back to his bigroom/trance roots, culminating in a release that will appeal to old and new Dash Berlin fans alike.

ANG is an up-and-coming Mexican duo, and “Firefly” marks the trio of artists’ first time collaborating. In honor of their inaugural joint project with Berlin, ANG resurfaced a tweet from 2014 that expressed their excitement to see Berlin perform live in Mexico City. They urge aspiring artists to “dream big” and “never stop working” now that their lives have come full circle, thanks to their new collaboration with Berlin.

“Firefly” is out now via Revealed Recordings and can be streamed below.