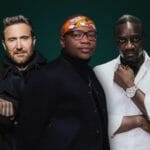 David Guetta has teamed up with South African viral sensation Master KG and Akon for an uplifting new single, “Shine Your Light.” A feel-good anthem, the track blends a brilliant Afro-house framework with a catchy commercial fabric woven throughout. The release highlights a new dimension of Guetta’s production abilities, marked by a distinct radio appeal and a mood-lightening atmosphere.

David Guetta and Akon have a rich collaboration history including 2009’s single “Sexy Chick” and their 2011 effort, “Play Hard” alongside Ne-Yo. It is the first time the artists have come together with Master KG, who ascended into notoriety after his breakout single “Jerusalema” went viral as part of a TikTok dance challenge. “Shine Your Light” featuring Akon is out now via Warner Records.