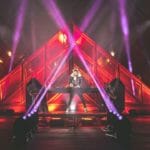 That the “festival mix” format is working its way back into relevancy can be read as a sign of the times, which trend to the return of live events. In a nearly four-minute acknowledgment of the consequential need for pyro-synching artillery for crowd play, David Guetta doubles down on “Bed” with a festival mix that takes the house and pop co-informed number to a livelier height.

De-emphasizing RAYE’s fan-favorite topline for more sonic emphasis, Guetta derives from the RAYE and Joel Corry-aided original a heady alternative with plenty of firepower to illuminate the main stage, the Vegas pool parties, and any electronically leaning settings in between. And, with the dance crown fixed ever firmly on his head, that’s precisely what we’d expect from David Guetta. Hear him deliver below.