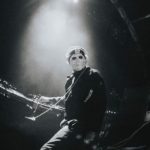 In a fated meeting between two masked enigmas, Deathpact and REAPER cross paths as the latter leads a growing list of heavyweight contributors to the former’s exhilarating remix campaign. Reverse engineering a typical release rollout, the anonymous force known as Deathpact ramps up the anticipation for their never-before-heard original with four sets of remixes from Code Orange, Claude VonStroke, CloZee, and REAPER.

REAPER’s synergistic assignment on the unidentified electronic project’s upcoming release is an obvious choice—both fast-rising acts possessing similar career trajectories and lethal sound design. The Monstercat favorite applies his scything drum ‘n’ bass tactile to his rendition, which stops at nothing to incite blistering bass across its anarchic soundscape. His pick on the remix collection among the ranks of industry staples further instates REAPER is indeed an Artist to Watch in 2021.