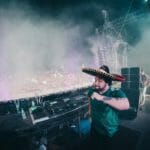 The rollout for Deorro‘s debut album ORRO continues to quite deliciously take shape with “Si Tú No Estás Aquí,” a sauntering Spanish lyrical extension of the pre-album period. Featuring the velvety vocals of Mexican singer-songwriter LÚA, “Si Tú No Estás Aquí,” which translates to “if you are not here,” harnesses a sun-kissed indie-electronic personality.

In tone, the sophomore preview of ORRO embodies the laidback laze of a spell in the afternoon sun. With one spin of “Si Tú No Estás Aquí,” palm trees and tropical fronds seem within reach, preserving the carefree feeling of the summer season in a four-minute and three-second amber. Deorro said of “Si Tú No Estás Aquí,” which serves as a particularly breezy follow-up to ORRO‘s debut, “Me Siento Bien,”

“[It] brings to life those feelings you get when you vibe with someone so hard that you think you must have met them before in this lifetime or another. I wanted this record to feel timeless, with a retro feel but with a little bit of my funk.”