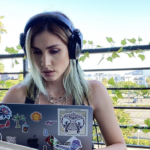 Skrillex and JOYRYDE don’t hand out co-signs to just anybody, so Russian-born producer DIIIVA was indisputably doing something right to earn two acknowledgements from the respective heavyweights. After embarking on a three-month learning session with the latter to meticulously craft her sound and brand, DIIIVA is joining the release ring for the first time in nearly a year with a take on Ty Dolla $ign, Skrillex, FKA twigs, and Kanye West‘s “Ego Death.”

DIIIVA pushes “Ego Death” in an entirely exhilarating and inspired direction, likely only scratching the surface of her untapped potential within the electronic space. While still wholly preserving the original’s galvanic club feel, DIIIVA flips “Ego Death” upside down, upgrading the A-list grouping into a kinetic, genre-less remodel. Both DIIIVA and JOYRYDE both shared messages behind the remix and their time seamlessly bouncing ideas off of each other. Says DIIIVA,

“2020 was transformational for me as I feel I was finally able to let go of old habits standing in my way, and could finally focus on what I want to create and who I really am. During this time I started the ‘Ego Death’ remix and spent time working in the studio with JOYRYDE. The remix went through a few versions until it sounded exactly right to both of us. I’m super excited it’s finally out and can’t wait to release more music this year.”

“It’s very easy for artists to become attracted to the wrong things in this world but to see when they are attracted towards discovery and fun always reminds me why I’m so grateful to be an artist. [DIIIVA]’s music and the way she behaves with it are just refreshing to me. It’s amazing to watch someone living in their most natural setting and do it so well.”