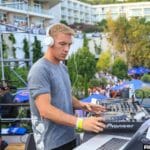 An ode to suspended dance floor action, Fred again.. and The Blessed Madonna’s “Marea (We’ve Lost Dancing)” is certainly a timely gem; however, Diplo has renewed the woeful collaboration to highlight its optimistic appeal.

Diplo’s rework sounds like it was designed to be tailor-made for underground DJ sets. After over a year without sanctioned access to dance floors, the Major Lazer spearhead’s latest offering is one to revel in. Ultimately, what makes the progressive bass drop so striking is Diplo’s nearly inexplicable cross-genre mastery, but the overall timeliness of the remix just adds an intangibly sweet element to the delivery.

As mask mandates lift, lineups drop, and many of the most bleak elements of 2020 begin to wane away, cue this one up on your newest playlist and bask in the excitement of dance floor reunions aplenty in 2021.