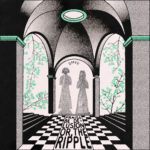 The vibes are alive and well in Denver. The CO’s own DMVU takes another trip on Dome of Doom records for the debut of yet another tripped out masterpiece, Praise Be Delusion or, The Ripple. A 15-track stroll through a sonic wonderland of deftly produced and seductively imagined electronica. Finding inspiration in the ’50s and ’60s beat movement, DMVU’s chosen title nods to Kerouac’s “Mexico City Blues (228th Chorus)” and the album follows in the same sort of exploratory wanderlust as its inspiration. Recorded in Denver, the album is built on piano compositions and a collage of synthetic filigrees. No two tracks on the album sound the same. Genres blur and blend, time signatures shift, something delightfully unexpected sits snugly inside every track.

One of the album’s stand out moments, “My Foolish Heart,” toys in a multitude of not only genres and BPMs, but feelings. Moments of peace are matched with the speed a ferocity of break beat BPMs, all dynamically layered and shifting underneath a steady drive forward, an undeniable momentum despite the constant changes in tone. DMVU’s impossible to pin down composition is so impossibly lush that it’s easy to get lost in.

And that’s definitely the point.

Praise Be Delusion or, The Ripple will release worldwide across DSPs and limited edition cassette formats February 26, 2021 with Dome of Doom.

Join us on Audius and support the mission to bring the power – and the profits – back into the hands of the music makers.

Sign up today. and check out The Space Station, our new playlist of Audius exclusives.