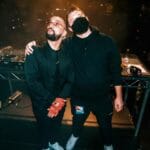 Dombresky and Noizu’s Revival EP honors the classic rave sound of the ’90s. The second track of the EP “Revival” features Croatian-born DJ Reblok who challenge the modern day standards of house music with their balance of hard electro and underground tech-house.

The French and UK production pair has taken its friendship to the top of the dance music scene thanks to a series of back-to-back DJ stints dating back to when they had moved to the same city in 2018. Together, the two will see their passions for house music come to fruition with their very own headlining back-to-back performance at The Hollywood Palladium scheduled to take place on November 13 in Los Angeles. Purchase tickets here and stream Revival below.

The post Dombresky and Noizu fire up their ‘Revival’ on Insomniac Records appeared first on Dancing Astronaut.