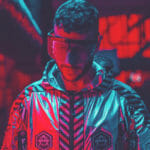 The world’s first full length concert on the blockchain is here.

Don Diablo breaks new ground with hid latest NFT. A full length audio visual experience, DΞSTINATION HΞXAGONIA is an entire hour of exclusive music and visuals that took over a year for Don and his team to dream up and create. The concept is an ode to his childhood favorites, drawing inspiration from Star Wars, Space Odyssey and the classic sci fi of his childhood. It sounds awesome. The only problem is if you want to watch it you’ll have to ask the anon who paid $1.25 million dollars for the “unique hand-crafted box, which includes a harddrive that contains the only copy of the high-quality file of the film.”

Don will also be placing a large portion of the proceeds into the HEXAGON Foundation, a fund he created to help artists in the NFT space. The foundation will enable artists to apply for support with everything that helps them to create, share and sell their art.

While the price tag is impressive, a whopping 600 ETH, it’s the creativity in the space and its implications for the future of digital content, digital ownership, and digital scarcity in this brave new world that should inspire more artists to follow suit in the future.

Or as Don Diablo puts it: The FUTURΞ.

See a clip of the NFT on Superare