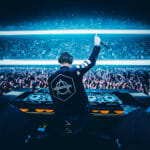 In collaboration with Justdiggit, Don Diablo has released his new single “Too Much To Ask” with crooner Ty Dolla $ign, as the unexpected pair call for support of the #STREAMTOREGREEN initiative that aims to help “re-green Mother Nature.”

The Hexagon label founder will join Pope Francis and other world leaders such as Pakistan’s Prime Minister Imran Khan, Germany’s Chancellor Angela Merkel, and more in addressing the United Nations as a part of World Environment Day. The full proceeds from the single will be donated to help fund small actions by “growing trees, re-greening our cities, re-wilding our gardens or cleaning up trash alongside rivers and coasts,” as stated by NEP Coordinator of the UN Decade on Ecosystem Restoration, Tim Christopherson.

“Too Much Too Ask” demonstrates the Dutch producer’s virtuous dance-pop flair as the mid-tempo house groove suavely compliments the famed R&B rapper’s harmonic vocal melodies. With each 25 streams of the new single, the #STREAMTOREGREEN act with will help re-green 10 feet of land and help further spread awareness of climate change. Stream “Too Much To Ask” below.

Tagged as Don Diablo, mid-tempo, music, too much to ask, Ty Dolla $ign.