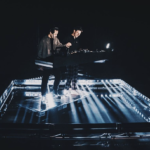 In back-to-back weeks, Drove have made their STMPD RCRDS presence known through two extensions of their forthcoming sophomore EP. Ahead of Dawn‘s exhaustive five-track touchdown on June 11, Drove are recruiting Justin Caruso for a helping production hand on “Intoxicated,” which trails the EP’s sedative lead single, “Peace Of Mind.”

The Dutch powerhouse, formed by Jelmer ten Hoeve (one-half of TV Noise), Eli Salomons, and Teun Wouters, fluently translate the newly formed project’s summer-trending direction to “Intoxicated.” The latest pre-Dawn single pools together Drove’s distinctive sound and Justin Caruso’s own house halo, reasserting Drove as one of the most promising new ventures to step on to the STMPD RCRDS platform this year.