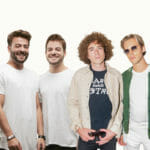 Brazil meets France, as Dubdogz and Ofenbach come together for the release of “On My Shoulders.”

The new single doesn’t only represent the middle ground between the two globally recognised acts, but stands as the perfect hybrid between two countries with musically distinct sounds. In one corner is Dubdogz, who live up to the surging Brazilian bass sound with their deep, plucking melody and club-ready edge. This all finds a perfect pairing on Ofenbach, whose polished and radio-ready electronic appeal brings a welcome layer of finesse and balance to Dubdogz’ kinetic house groove.

Coined by some as a late contender for the ‘Catchiest Track of 2021,’ Dubdogz and Ofenbach’s “On My Shoulders” is out now via Spinnin’ Records. Run the risk of getting it stuck in your head and stream the full track below.

The post Dubdogz and Ofenbach create musical melting pot with new single, ‘On My Shoulders’ appeared first on Dancing Astronaut.