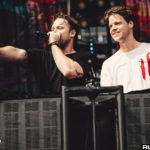 Is a week into 2021 too early to open up the producer of the year conversation? We’re only kidding (not really), but there was never an ounce of reservation for DubVision to enter the new year with the spot-on level of house imperium in which they departed 2020. The brothers are now officially writing in their name on 2021’s sonic scoreboard, and while it may not be the suspected inclusion during Martin Garrix‘s Tomorrowland New Year’s Eve performance, it’s admittedly something even more reassuring with the delivery of “Deeper.”

“Deeper” of course finds a home at none other than STMPD RCRDS, and DubVision’s admission into the year plunges further into their kinetic repositioning within house. Comparatively wielding a similar high-octane foundation to “Like This,” “Deeper” is incontestably unlike anything DubVision has fastened to their tenure when scanning their prior decade-plus of top-notch showings, but the single serves to be another source of open-and-shut confirmation that the two siblings stand alone when it comes to each and every street of house music.