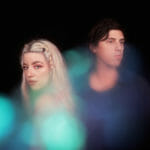 Durante and HANA are proving to be a must-watch duo. Last year, they released their first collaborative EP 13 Voices together, a gorgeous blend of Durante’s sublime deep/melodic house production and HANA’s angelic vocal talent. Now, the pair returns to Anjunadeep for another three-track EP, Celestia. The new EP shows not only that the compelling pair can replicate the magic of their first release, but also build on their sound and progress into new territories. “Away Home” and the EP’s title track lean into the emotive side of melodic house territory, while Celestia‘s closer “Whisper Cell” cranks up the tempo for an enthralling taste of the duo’s versatility.

Anjuna fans got their first taste of the Celestia EP in February when “Away Home” debuted on Anjunadeep 12. Dancing Astronaut caught up with Durante and HANA to chat about the duo’s body of work together, their collaborative style, and what’s to come for them.

You two have released several collaborations already, is there anything in particular that keeps both of you coming back to work with one another?

Durante: Working with Hana is effortless. It really helps we have a very similar taste in music and we’re always sending each other tracks we like, whether it’s drum & bass, techno, trance. I feel like we both pull a lot of influences from different types of music and Hana’s experience with being such a multi faceted producer really helps push the music from being strictly a dance record to more of a transcendent sound. Also have you heard her voice????

HANA: We just work so easily together. It’s a very natural and organic process. We realized that we have the exact same taste in dance music a few years ago, so our musical instincts really thrill one another. We’ve been friends for about 8 years so we are very comfortable giving each other feedback and being open with one another.

What is your collaborative process like? How do each of you present your musical ideas to one another?

Durante: When we released our 13 Voices EP in 2020, we did some production live streams on Anjuna’s Twitch channel to showcase our musical process. This is actually where we started working on this EP! Usually I’ll start with a drum beat and start playing some synths while recording vocals from Hana. It’s pretty free form until we get some sort of loop or melody that sticks, then we just build from there.

HANA: On our first EP 13 Voices, we worked incredibly fast in the same room together, both taking turns at the computer and at different synths around the studio. For the Celestia EP, we worked entirely remotely, sharing our screens/audio and talking over discord. Durante handled the session file, perfecting the drums and synths while I added vocals and synth parts and fine tuning of production. I will usually sing many many parts and then we both pick and choose our favorite vocal parts and lyrics. There’s zero judgement in our workflow, so working together is extremely chill and comfy

This is your second EP together released via Anjunadeep, how does it differ from your first?

Durante: Personally I feel that the Celestia EP is the perfect continuation of 13 Voices, like an elevation of the original idea that made the first EP. When we started working on the 3 tracks, everything was beginning to go into lockdown. We wanted to write something that was fun to listen to in a live setting, or even a dance floor at home, and I feel like the range of music fits a lot of different atmospheres. I feel like there’s something for everyone in this release.

HANA: Whisper Cell is SO exciting to me because its extremely different from anything either of us has put out. It’s 132 bpm and has both trance and techno influences. It’s the one I am the most excited to play out in a live room. It really makes me lose my mind. Overall, making the EP was a perfect escape from dreary quarantine. There are overtones of a vague sadness throughout the songs which reflect this, but overall I wanted the songs to feel hopeful.

What’s in store for both of you this summer?

Durante: After this EP I have another EP planned for late summer on Openers Records, and another 2 track EP slated for later this year on a label we haven’t announced yet. Very excited for everything coming up!

HANA: I’m going to be streaming more! Over quarantine my Twitch stream grew exponentially and has been such an amazing outlet for creativity and playing music. I am excited to be making more music and getting ready to play some shows late summer and fall! It’s going to be so euphoric!!!