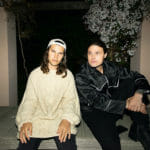 The Canadian brothers are back to make an electrifying statement with the debut single from their upcoming album “SLEEP.” Not the type of track to put you to sleep, “Fool For Ya” is designed to help you shake off the cobwebs. It’s an alarm clock for the dormant and a throwback to the duo’s early releases. An updated take on the high energy, larger than life electro that launched their career, the boys have crafted yet another banger just waiting for festival stages to re-open around the world.

If this is the type of “sleep” they were talking about then none of us are getting of it, any time soon.