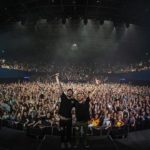 In October of 2020, Last Heroes and Woodlock would align their names on the former’s penultimate Finding Light tracklisting. Call it an unlikely creative alliance between an emotive electronic force and the Melbourne-based acoustic/folk band, but don’t call it a fluke, for Last Heroes and the three-piece Woodlock outfit are carrying their collaborative interplay into 2021 with the former’s remix of the latter’s “Feel It Coming.”

Last Heroes cerebrally rewire “Feel It Coming,” which hails from Woodlock’s February 2021 LP, The Future of an End. Keeping the bones of the original largely intact, the Colorado-formed duo tastefully and unimposingly adds a rushing touch of electronic character to the vocal-led number. Preserving the indie/singer-songwriter appeal of “Feel It Coming,” Last Heroes add dance color in balanced fashion below.