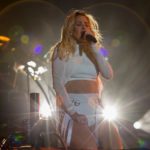 Silk City are making a comeback, and they’re bringing Ellie Goulding with them.

Just one day after both Diplo and Mark Ronson confirmed via respective January 13 tweets that a Silk City return of some sort was in the works, Goulding signaled her involvement with a tweet that linked out to the same website that Diplo and Ronson’s did, “The New Love Club.” Though the extent of Goulding’s role in Silk City’s reactivation and the details that surround it currently remain unclear, it is possible that Goulding will feature on the song that Diplo and Ronson previewed in their tweets at a minimum. For now, fans can RSVP on The New Love Club for whatever comes next.

…and we’re back. Heard you needed to dance? pic.twitter.com/NtLU7QucQO