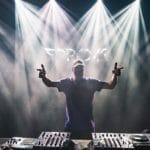 His first official release of 2021, “Dangerous Sound” kicks off slowly, incorporating the ambiance of a large crowd before completely demolishing fans with the bass connoisseur’s brain-liquefying sonics. Pulling out all the stops, “Dangerous Sound” configures each synth, kick, and sample into a dystopian paradise experimental bass fans can only dream of. Stream below.