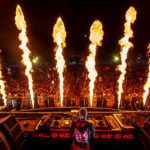 Two of the biggest names in bass music have finally released their long-awaited collaboration. After teasing it in sets for a year, Excision and Subtronics officially unveiled their heavy handed new single “Bunker Buster.” The collaboration is exactly what longtime fans of the two selectors would expect from the festival circuit regulars. “Bunker Buster” packs a gritty punch, offering decimating low end in anticipation for the return to live events. In fact, the release comes shortly after promising updates on Excision’s Lost Lands and Bass Canyon.

The only other time the two have come together on a song was for Subtronics remix of “Vault.” It was only a matter of time before the pair would link in an official capacity, and “Bunker Buster” proved to be well worth the wait. Excision is following up his previous 2021 releases “Unbound” with Sullivan King and “The Last Time” with Whales. This also marks the latest release on his new label Subsidia Records. This is Subtronics first release of 2021 after a banner 2020 that saw him announce the formation of his own label Cyclops Recordings and follow up Scream Saver EP. Stream “Bunker Buster” below.