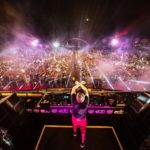 Though unable to tour or play any live, in-person shows for the better part of last year, Excision still managed to make 2020 bow down to him. Alongside the unveiling of his own label, Subsidia Records, the headbanging honcho revealed a mix as well as three new compilation albums. Since unveiling Subsidia in late September of 2020, Excision and friends have released the first and second volumes for all three compilation albums, Dusk, Dawn, and Night. Dawn is the latest of the three to get a follow-up, with Dawn Vol. 2 formally opening Subsidia’s 2021 release catalog.

Although Dawn Vol. 2 boasts established names including Excision’s own new single “The Last Time” with WHALES and RIELL, as well as ARIUS, yetep, and Computa, many of the other featured artists are relatively up-and-coming, like Shyloom, OMAS, and Jorge Toscano. Subsidia Records is oriented around artistic diversity and inclusion, and Dawn Vol. 2 evidently extends this trend into the new year.