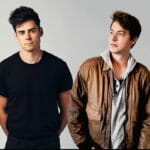 Wind the clock back about six years, and Fairlane would have just discovered Grant. The latter’s “attention to detail, sound design, and creativity” would catch Fairlane’s ear, conferring a memorable character to Grant’s craft. Jump back to the present moment, and via Proximity comes “Hypnotize,” an amalgamation of Fairlane’s own capabilities and the qualities of Grant’s music that would make an impression on Fairlane years prior. Attesting that “Hypnotize” is as much an emblem of his and Grant’s synergy as it is “a project that truly challenged [him] and taught [him] how inspiring collaboration can be,” the single, written from a backyard in California, spills forth to streaming platforms with presence. From its instrumental lacing to its octave-scaling topline, the tightly stitched track justifies sonic bookmarking.