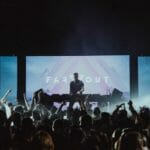 It wasn’t exactly a coincidence that we decided to induct Far Out into Dancing Astronaut‘s Artists to Watch in 2022 on the week of his EP’s arrival, although it was genuinely was pure serendipity that Somewhere In Between was planned for mid-December after we’d already cemented the idea that he’d be placed into our forenamed class. After reenrolling into the musical cycle this past October after nearly a full calendar pause, the interstellar mastermind began a descent towards a follow-up EP on Ophelia Records, with Far Out now slotting in Somewhere In Between‘s remaining two pieces to mark his first original project since Beyond The Horizon.

With both “Waterfall” alongside RIOT and Dancing Astronaut Supernova RUNN as well as “Ultraviolet” with Leonard A, Far Out didn’t squander a millisecond in descending his cosmic production onto the imaginative bedrock of Ophelia Records, tackling polar melodic ends that went from dubstep to trance. Somewhere In Between‘s latter side sees Far Out venture even deeper into the unexplored cosmos of his sound, tapping in DVRKCLOUD for the first of two supplements in “Elevate” as they spawn a transcendent synthesis of melodic dubstep, psytrance that sets a proper pace for those jumping into the EP blind. A familiar Ophelia face joins on the other end of the fresh EP additions, with Far Out and Dani Carra gracefully meshing on “Start Over,” boasting a bracing dose of melodic dubstep before accelerating head first into a rhapsodic trance finale. With all four pieces of Somewhere In Between now sonically tangible, it’s more than evident that Far Out made his 11-month silence of original releases worthwhile as he adventures through another melodic masterclass that’s a preemptive testimonial of what’s to come in 2022.

The post Far Out guides second melodic masterclass on Ophelia Records with ‘Somewhere In Between’ appeared first on Dancing Astronaut.