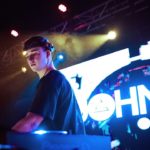 John Summit has finally released his highly anticipated ID, “Make Me Feel.” Named one of Dancing Astronaut’s Artists to Watch in 2021, Summit has been making waves over the past year, and remains one to keep an eye on as we head into the summer.

Filled with grooving movements and a steady tech house beat, the track features pitched-up vocal cuts looping, “ooh, yeah, it’s the way you make me feel,” leading into a deep vocal sample bouncing over the bassline. With his new single, the Chicago-born house producer displays just how much his city’s history has influenced his sound.

“Make Me Feel” arrives as Summit’s third release of the year, following “Beauty Sleep,” and a remix of Gorgon City’s “You’ve Done Enough.” Equally as enticing—and in case you missed it—Summit’s track “Deep End” was remixed by Nitti Gritti and Party Favor’s project, SIDEPIECE, in late 2020.

Listen to “Make Me Feel” below, and keep an eye out for more releases from the up-and-coming producer.