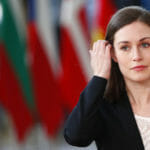 Finland’s prime minister, Sanna Marin, came under fire after a Finnish gossip rag published photos that spotted her dancing at a club until 4:00 a.m. on Saturday, December 4. Marin had reportedly been exposed to COVID-19 after meeting with Finnish foreign minister, Pekka Haavisto, the day before her night out. Haavisto had reportedly tested positive on Saturday.

After news spread of her night out on the town, Marin took to Facebook to write an apology.

“My husband and I had been out to eat, been shopping in town, seen friends and also spent time [enjoying] the evening and nightlife. I should have used better judgement and double-checked the guidance given to me. I am very sorry for not understanding that I needed to do that.”

She then made a televised statement made by public broadcaster Yle Wednesday night, stating,

“I did wrong. I should have considered the situation more carefully.”

However, Marin had not been the only Finnish minster who went out after being exposed to COVID-19. Economic Affairs Minister Mika Lintila had gone out to a floor ball match between Finland and Latvia on Sunday, while Defense Minister Antti Kaikkonen went to a dinner party.