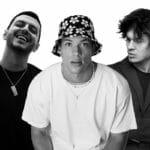 Rising house talents SLVR and offrami bring on the smooth vocal chops of LOUIS III for “Do Anything,” a deep and bassy club track that shines a light on the rarely found middle ground between chilled home listening and a wild night out.

Italy’s SLVR has not only been climbing the stairs of success this year, but has practically been speed running them. Between Afrojack himself releasing an edit of his recent single, “My Sound,” as well as his own Splice sample pack, it’s safe to say that SLVR’s stock is on the rise worldwide. offrami, too, has been ripping and tearing his way through 2021. A recent signee of Spinnin’ Records, the Lebanese-born, LA based producer brings a vibe that’s all his own as he hones in on the sweet spot between silky smooth vocal productions and too cool for school house beats.

Arguably the most commanding sound on this track, however, is the perfectly ripe vocal performance from LOUIS III. A rising star of his own, the English singer has truly made his raw talent work for him, landing features on Sigma’s “Anywhere” as well as a TikTok following of over half a million.

Tagged as Afrojack, do anything, Louis iii, music, offrami, SLVR.