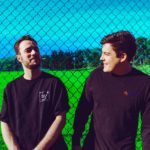 Syence have demonstrated their music’s capacity to catch on like wildfire, a trend that now continues with the duo’s viral sensation “a little bit bored” featuring German singer-songwriter Ruuth. Though “a little bit bored” is out now via all major streaming platforms, it will only be new to some, thanks to the fact that it took over Triller in December of 2020 as part of a NYX Cosmetics digital pop-up shop campaign.

After surfacing on Triller, “a little bit bored” caught the attention of HITCO, prompting the label to immediately sign the LA-based duo. Their first release on their new home imprint is, fittingly, the official release of “a little bit bored.” Speaking on the track’s inception, Syence say,

“Ruuth and Quarterhead sent us the original demo for ‘a little bit bored’ and we were immediately obsessed. We knew we had to work on it. We’ve never been so impressed with a vocal. The story that Ruuth is able to tell in the short time throughout the song really resonated with us and made it so easy to build out the production around the vocal.”

“I really get turned off by the type of people who text me with way too many emojis and act too needy. When Quarterhead, Syence, and Chris James echoed that they had similar experiences, we immediately felt that we had a fun concept going. Now, with the pandemic, it feels even more right to re-evaluate the types of relationships we want to keep and the ones we want to let go of.”

The track itself immediately lures the listener in with its charming melody and Ruuth’s alluring vocals, all of which fall into a punchy progressive house backdrop. Those hoping to hear the single live are in luck; Syence are set to perform at Whethan‘s upcoming Anaheim drive-in show on March 20.